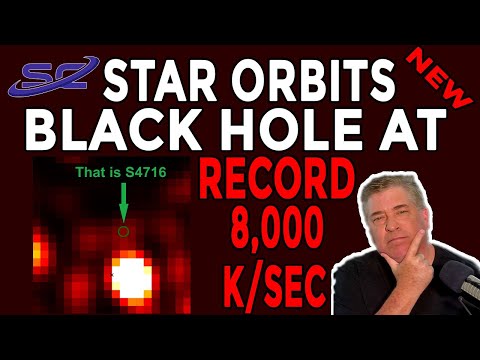 Don’t blink or you might miss it. An international team of researchers have discovered the fastest known star.

Astrophysicists at the University of Cologne and Masaryk University in Brno, Czech Republic report that star S4716 orbits Sagittarius A, the black hole in the center of our Milky Way, at an astonishing 8,000 kilometers per second.

Researchers say a densely packed cluster of stars, called the S cluster, is home to well over 100 stars that differ in their brightness and mass near the black hole. The S stars move incredibly fast.

“One prominent member, S2, behaves like a large person sitting in front of you in a movie theater: it blocks your view of what’s important,” says Dr. Florian Peissker, study lead author, in a statement. “The view into the center of our galaxy is therefore often obscured by S2. However, in brief moments we can observe the surroundings of the central black hole.”

Dr. Peissker found the S4716 star travels around the central supermassive black hole in four years. Five telescopes observed the star. “For a star to be in a stable orbit so close and fast in the vicinity of a supermassive black hole was completely unexpected and marks the limit that can be observed with traditional telescopes,” explains Dr. Peissker.

Researchers add that this discovery sheds new light on the origin and evolution of the orbit of fast-moving stars in the Milky Way.

“The short-period, compact orbit of S4716 is quite puzzling,” says Michael Zajacek, an astrophysicist at Masaryk University. “Stars cannot form so easily near the black hole. S4716 had to move inwards, for example by approaching other stars and objects in the S cluster, which caused its orbit to shrink significantly.”

This latest discovery comes as astronomers from the University of North Carolina at Chapel Hill found a trove of massive black holes that were hiding in plain sight. This added to evidence that massive black holes are more common in dwarf galaxies than previously thought.

“Just like fireflies, we see black holes only when they’re lit up — when they’re growing — and the lit-up ones give us a clue to how many we can’t see,” explains University of North Carolina-Chapel Hill Professor Sheila Kannappan. “We’re still pinching ourselves. The black holes we’ve found are the basic building blocks of supermassive black holes like the one in our own Milky Way. There’s so much we want to learn about them.”