This asteroid is a kid’s dream come true! NASA scientists recently discovered the surface of the asteroid Bennu is — shockingly — like a plastic ball pit!

Scientists made the revelation when NASA’s OSIRIS-REx spacecraft collected a sample from Bennu in October 2020. If the spacecraft didn’t fire its thrusters to back away immediately after grabbing dust and rock from the asteroid’s surface, it would have sunk into Bennu.

So why are they comparing asteroid Bennu’s surface to a plastic ball pit? The particles making up the asteroid’s exterior are so loosely packed and lightly bound to each other, that a person would feel very little resistance if they were to step onto Bennu.

“If Bennu was completely packed, that would imply nearly solid rock, but we found a lot of void space in the surface,” says Kevin Walsh, a member of the OSIRIS-REx science team from Southwest Research Institute, in a statement.

READ: Can NASA’s Earth defense system really protect us from an ‘Armageddon’ asteroid?

Scientists were shocked when the OSIRIS-REx spacecraft picked up a sample and beamed close-up images of the asteroid’s surface to Earth. “Our expectations about the asteroid’s surface were completely wrong,” says Dante Lauretta, principal investigator of OSIRIS-REx. “What we saw was a huge wall of debris radiating out from the sample site. We were like, ‘Holy cow!’”

The unpredictable asteroid also left researchers puzzled due to the large number of pebbles strewn about with how gently the spacecraft touched the surface. The spacecraft also left a massive crater that was 26 feet wide.

“Every time we tested the sample pickup procedure in the lab, we barely made a divot,” says Lauretta. Because of this, the team sent the spacecraft back to take more photographs of Bennu’s surface “to see how big of a mess we made,” explains Lauretta.

Scientists investigated the volume of debris visible in before and after images of the sample site and also analyzed the acceleration data collected during the spacecraft’s touch down. Scientists found the spacecraft experienced very little resistance when it touched the asteroid.

“By the time we fired our thrusters to leave the surface we were still plunging into the asteroid,” says Ron Ballouz, an OSIRIS-REx scientists based at the Johns Hopkins Applied Physics Laboratory in Laurel, Maryland.

Scientists were able to deduce Bennu’s density and cohesion after running hundreds of computer simulations based on spacecraft images and acceleration information. Scientists warn Bennu could break apart in Earth’s atmosphere and pose a different type of hazard than solid asteroids.

“I think we’re still at the beginning of understanding what these bodies are, because they behave in very counterintuitive ways,” says Patrick Michel an OSIRIS-REx scientist and director of research at the Centre National de la Recherche Scientifique at Côte d’Azur Observatory in Nice, France.

The surface isn’t the only surprise Bennu revealed to scientists. When the spacecraft first arrived at Bennu in December 2018, the asteroid’s surface was littered with boulders. Scientists initially expected a smooth, sandy beach surface based on observations from Earth- and space-based telescopes. The asteroid was also spitting rock particles into space. 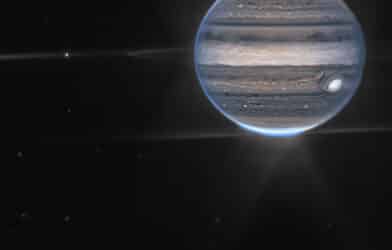