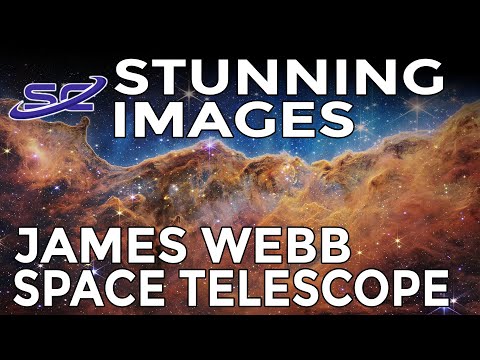 The first full-color images taken by NASA’s James Webb Space Telescope are finally here. Astronomy admirers near and far are celebrating the long-awaited series of pictures that offer a view of the universe like we’ve never seen before. With unparalleled sharpness, the images show cosmic phenomena in stunning detail and color.

Let’s start with this extraordinarily spectacular view of the Carina Nebula, which is one of the largest and brightest nebulae in the sky. It’s located approximately 7,600 light-years away in the southern constellation Carina. It’s home to many massive stars, several times larger than the Sun.

“Called the Cosmic Cliffs, Webb’s seemingly three-dimensional picture looks like craggy mountains on a moonlit evening. In reality, it is the edge of the giant, gaseous cavity within NGC 3324, and the tallest “peaks” in this image are about 7 light-years high,” according to NASA. “The cavernous area has been carved from the nebula by the intense ultraviolet radiation and stellar winds from extremely massive, hot, young stars located in the center of the bubble, above the area shown in this image.”

In another picture, the telescope provides a mesmerizing glimpse of the Southern Ring, or “Eight-Burst” nebula, which is a planetary nebula – an expanding cloud of gas, surrounding a dying star. It is nearly half a light-year in diameter and is located approximately 2,000 light years away from Earth.

The telescope provides a new look at “cosmic dance” seen in Stephan’s Quintet, located 290 million light-years away in the constellation Pegasus. It is notable for being the first compact galaxy group ever discovered in 1877. Four of the five galaxies within the quintet are locked in a cosmic dance of repeated close encounters.

Another picture reveals WASP-96 b, a giant planet outside our solar system, composed mainly of gas. The planet, located nearly 1,150 light-years from Earth, orbits its star every 3.4 days. It has about half the mass of Jupiter, and its discovery was announced in 2014.

On Monday, the agency gave a sneak preview of what’s to come after releasing the James Webb Space Telescope’s first image at the White House. Dubbed “Webb’s First Deep Field,” it reveals a galaxy cluster called SMACS 0723 as it appeared 4.6 billion years ago. NASA says the image is a composite created by a series of images taken at different wavelengths. The image took 12.5 hours to come together, an amazing feat in and of itself. FOr comparison, the agency says snapshots beyond the Hubble Space Telescope’s deepest fields require weeks to accomplish.

“Thousands of galaxies – including the faintest objects ever observed in the infrared – have appeared in Webb’s view for the first time,” NASA explains. “This slice of the vast universe covers a patch of sky approximately the size of a grain of sand held at arm’s length by someone on the ground.”

The exciting ceremony began Tuesday morning at 9:45 a.m., when NASA officials gave opening remarks airing on NASA TV, the NASA app and the agency’s website ahead of the first images release.

Following the live image release broadcast, NASA and its partners will hold a joint media briefing at NASA Goddard at 12:30 p.m.

On Wednesday, NASA Science Live will air on its website and social media channels as Webb experts will answer questions about the first images and data.

The space agency will also host an in-person NASA Social on Tuesday and Wednesday. Social media users can also join a virtual global social event on Facebook to get a behind-the-scenes look at the mission and celebrate James Webb Space Telescope’s first images.

“Released one by one, these first images from the world’s largest and most powerful space telescope will demonstrate Webb at its full power as it begins its mission to unfold the infrared universe,” NASA says in a statement.

NASA believes the Webb telescope will solve mysteries in our solar system, look beyond to distant worlds around other stars and probe the mysterious structures and origins of our universe and our place in it.