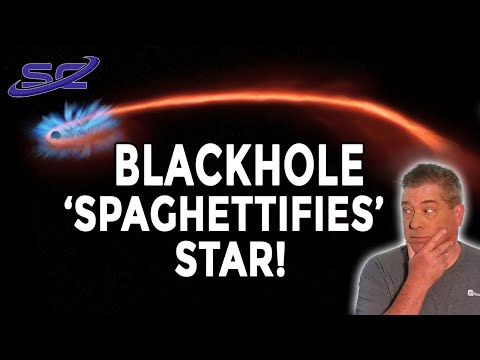 Astronomers from University of California Berkeley made an astonishing discovery after observing a star that was shredded, or “spaghettified,” when it got too close to a massive black hole. The incident took place 215 million light-years from Earth, but it was bright enough where astronomers could study the stellar death’s optical light to learn how the star was torn apart.

Researchers say the star’s shredding occurred on Oct. 8, 2019. The star’s material was blown away up to 10,000 kilometers per second. It then formed a spherical gas cloud that plugged most of the high-energy emissions produced as the black hole devoured the rest of the star.

Previous observations of optical light from the blast showed that most of the star’s matter was launched outward in a powerful wind. However, astronomers discovered in new data on the light’s polarization that the cloud was likely spherically symmetric. The polarized light was emitted from the spherical cloud surface with a radius about 100 astronomical units, 100 times farther from the star than Earth is from the sun. The hot gas emanated an optical glow from a region at about 30 astronomical units.

“This is the first time anyone has deduced the shape of the gas cloud around a tidally spaghettified star,” says Alex Filippenko, UC Berkeley professor of astronomy and research team member, in a statement.

Their results reveal why astronomers don’t see high-energy radiation, like X-rays, from tidal disruptions. “The X-rays, which are produced by material ripped from the star and dragged into an accretion disk around the black hole before falling inward, are obscured from view by the gas blown outward by powerful winds from the black hole,” the media release reads.

“This observation rules out a class of solutions that have been proposed theoretically and gives us stronger constraint on what happens to gas around a black hole,” says study lead author Kishore Patra, a Berkeley graduate student. “People have been seeing other evidence of wind coming out of these events, and I think this polarization study definitely makes that evidence stronger, in the sense that you wouldn’t get a spherical geometry without having a sufficient amount of wind. The interesting fact here is that a significant fraction of the material in the star is spiraling inward doesn’t eventually fall into the black hole — it’s blown away from the black hole.”

Previously, astronomers theorized stellar debris formed an eccentric, asymmetric disk after disruption. An eccentric disk is expected to show a high degree of polarization, but that was not observed in this particular tidal disruption event.

“One of the craziest things a supermassive black hole can do is to shred a star by its enormous tidal forces,” says team member Wenbin Lu, UC Berkeley assistant professor of astronomy. “These stellar tidal disruption events are one of very few ways astronomers know the existence of supermassive black holes at the centers of galaxies and measure their properties. However, due to the extreme computational cost in numerically simulating such events, astronomers still do not understand the complicated processes after a tidal disruption.”

Astronomers made a second set of observations on Nov. 6, 2019, revealing that the light was very slightly polarized as the cloud had thinned enough to unveil the asymmetric gas structure around the black hole.

“The accretion disk itself is hot enough to emit most of its light in X-rays, but that light has to come through this cloud, and there are many scatterings, absorptions and reemissions of light before it can escape out of this cloud,” says Patra. “With each of these processes, the light loses some of its photon energy, going all the way down to ultraviolet and optical energies. The final scatter then determines the polarization state of the photon. So, by measuring polarization, we can deduce the geometry of the surface where the final scatter happens.”

The study was published in the journal Monthly Notices of the Royal Astronomical Society.