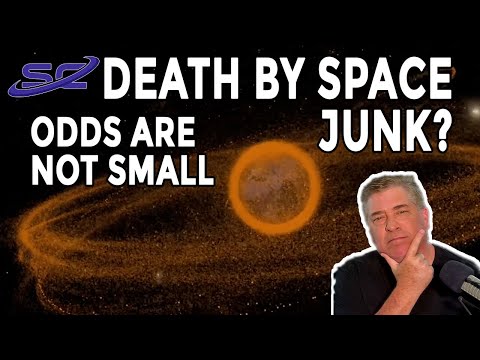 Experts have long noted that you’re more likely to get struck by lightning than perish in a plane crash. More recently, researchers from the University of British Columbia (UCB) calculated the odds of space rocket debris hitting and injuring someone, and the risk isn’t negligible.

The authors of the recent study estimate free-falling rocket debris has about a 10% chance of killing one or more people over the next decade under current practices. Rockets release weight during certain stages in-orbit, some of which fall back down to Earth. The amount of space rocket parts left over from previous launches has grown over time and will continue with the increase in space activities.

“Is it permissible to regard the loss of human life as just a cost of doing business, or is it something that we should seek to protect when we can? And that’s the crucial point here: we can protect against this risk,” says the lead author of the study Michael Byers, professor in UBC’s department of political science, in a statement.

The team combed through 30 years of data from a public satellite catalog to calculate the risk free-falling satellites pose to human life within 10 years. Byers notes that conservative estimates consider the probability of casualties for people on Earth, but don’t consider worst-case scenarios, like a piece of debris striking an airplane.

Researchers also report that pieces of free-falling rocket debris are more likely to land in certain countries compared to others due to the orbits used when launching satellites. They discovered that junk from space rockets are three three-times more likely to land at the latitudes of Jakarta, Dhaka, and Lagos than New York, Beijing, or Moscow.

“Risks have been evaluated on a per-launch basis so far, giving people the sense that the risk is so small that it can safely be ignored,” explains co-author Aaron Boley, associate professor in the department of physics and astronomy. But the cumulative risk is not that small. There have been no reported casualties yet, and no mass casualty event, but do we wait for that moment and then react, particularly when it involves human life, or do we try and get in front of it?”

Looking ahead, the researchers say governments must work together to implement measures that safely guide rocket bodies back to Earth.

The study is published in the journal Nature Astronomy.