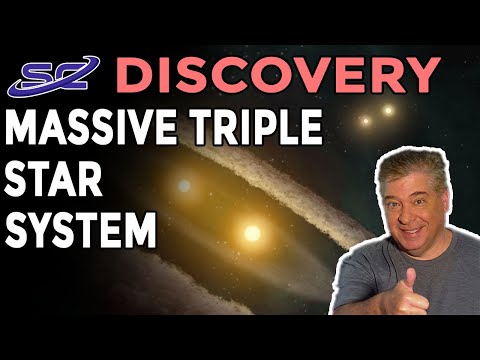 Amateur astronomers have made a first-of-its-kind discovery. They detected a compact and massive triple star system.

Citizen scientists were going through a public set of data from NASA’s Transiting Exoplanet Survey Satellite observatory when they found something unusual. It turned out what was thought to have been two stars, were actually three.

The amateur astronomers made the professionals aware of their discovery, and that’s where Bin Liu and Alejandro Vigna-Gomez come in. These young researchers from the Niels Bohr Institute at the University of Copenhagen are now analyzing how this combination of a binary set of stars and a revolving bigger star can form. Two stars orbit one another and then a separate massive star orbits the binary stars.

“As far as we know, it is the first-of-its-kind ever detected,” says Vigna-Gomez in a statement. “We know many tertiary star systems (three-star systems), but they are typically significantly less massive. The massive stars in this triple are very close together — it is a compact system.”

The binary’s orbital period is the same as that of the Earth’s rotation. The combined mass of the binary is 12 times the mass of the sun, while the tertiary star is nearly 16 times the sun’s mass. “The inner orbit is circular in shape with close to six revolutions of the tertiary star around the binary per year,” explains Vigna-Gomez. “Pretty fast, when you consider the size of them — unsurprisingly, the system is very luminous, so at first they were detected as a stellar binary.”

Vigna-Gomez and Liu considered several options on how the star system formed. The options include: the bigger star forming first — likely ejecting material that would have disrupted the formation of a binary that close; the binary and third star forming separately from each other and ended up encountering and locking in their orbits because of gravity; and two binaries formed and one merged into one, bigger star.

The researchers coded the options and ran more than 100,000 iterations to assess the most likely outcome. Their results found two binary systems forming initially and one of them merging to one star. The two binary scenario explains the origin of the triple system.

“Now we have a model of the most likely scenario on this unique system. But a model is not enough,” says Vigna-Gomez. “And there are two ways in which we can prove or disentangle our theory on this formation. One is studying the system in detail and the other is to make a statistical analysis on a population of stars. If we go to the system in detail, we shall have to rely on the expertise of an astronomer. We already have some preliminary observations, but we still need to go through the data, and make sure we are interpreting it well.

“We also encourage people in the scientific community to look at the data deeply,” Lin adds. “Maybe there are more compact systems buried in the data. What we really want to know is whether this kind of system is common in our universe.”

The study is published in the journal Monthly Notices of the Royal Astronomical Society.