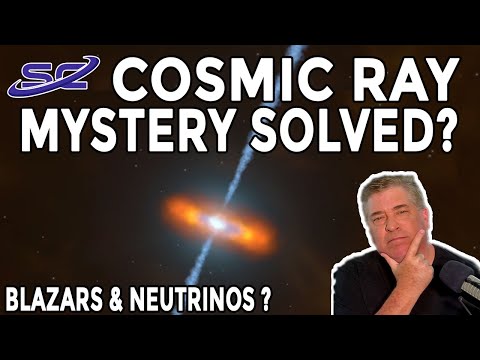 Scientists are now one step closer to solving a century-old cosmic ray mystery. Cosmic rays, which constantly bombard Earth, are charged particles that travel up to nearly the speed of light from deep outer space. They are 1 million times more energetic than anything achieved by the Large Hadron Collider, the world’s most powerful particle accelerator.

Astrophysicists have tried to determine the origin of cosmic rays and what propels them with such immense force. An international team of researchers might have found the answer as they have discovered astrophysical neutrinos originate from blazars. According to scientists, “blazars are active galactic nuclei powered by supermassive black holes that emit much more radiation than their entire galaxy.”

Astrophysical neutrinos could help find cosmic ray sources. Neutrinos are tiny neutral particles produced by cosmic ray interactions in these extreme accelerators. Neutrinos have very little mass and hardly interact with matter. These small particles travel through galaxies, planets and the human body without a trace. Since electromagnetic forces do not affect neutrinos, they can be traced back to their astrophysical sources, unlike cosmic rays. The galaxy’s magnetic fields deflect cosmic rays during their journey through space, making it impossible for scientists to trace where they originated.

The IceCube Neutrino Observatory, which is buried deep in the ice at the South Pole, detected a neutrino in 2017, and traced it back to blazar TXS 0506+056. Using data obtained by IceCube and a catalog of astrophysical objects identified as blazars, researchers found evidence that a subset of blazars originated in the observed high-energy neutrinos.

“We had a hint back then (in 2017), and now we have evidence,” says Marco Ajello, lead researcher and associate professor of physics and astronomy at Clemson University, in a statement.

Collaborator Andrea Tramacere, from the University of Geneva, says the discovery of these high-energy neutrino factories represents a major milestone. “It places us a step forward in solving the century-old mystery of the origin of cosmic rays,” explains Tramacere.

Researchers will now study how blazars become good accelerators. Ajello says their research will also illustrate the important of multi-messenger astronomy, as they can now detect other “messengers,” such as cosmic rays, neutrinos and gravitational waves.

“It’s like feeling, hearing and seeing at the same time. You’ll get a much better understanding,” says Ajello. “The same is true in astrophysics because the insight you have from multiple detections of different messengers is much more detailed than you can get from only light.”

The study is published in The Astrophysical Journal Letters.