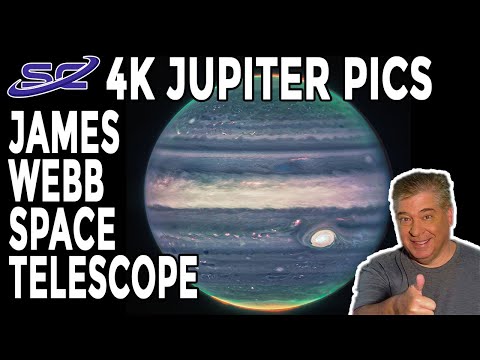 These are the jaw-dropping new views of Jupiter as seen by the James Webb Telescope. Unveiled August 22 by NASA, they show the complexity of the planet’s climatic conditions.

“With giant storms, powerful winds, auroras, and extreme temperature and pressure conditions, Jupiter has a lot going on. Now, the NASA/ESA/CSA James Webb Space Telescope has captured new images of the planet. Webb’s Jupiter observations will give scientists even more clues to Jupiter’s inner life,” a statement explains.

Images come from the observatory’s Near-Infrared Camera (NIRCam), which has three specialized infrared filters that showcase details of the planet.

Since infrared light is invisible to the human eye, the light has been mapped onto the visible spectrum. Generally, the longest wavelengths appear redder and the shortest wavelengths are shown as more blue.

In a wide-field view, the James Webb Space Telescope sees Jupiter with its faint rings, which are a million times fainter than the planet, and two tiny moons called Amalthea and Adrastea. The fuzzy spots in the lower background are likely galaxies “photobombing” this Jovian view.

This is a composite image from Webb’s NIRCam instrument (two filters) and was acquired on 27 July 2022. Scientists collaborated with citizen scientist Judy Schmidt to translate the Webb data into images.