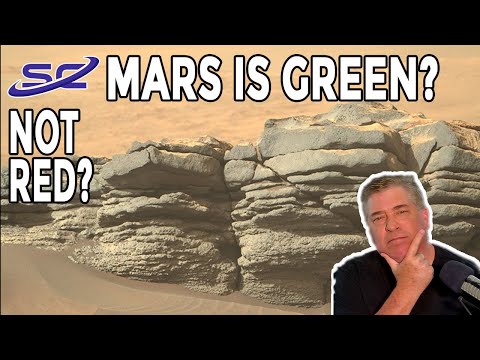 The sands on Mars may actually be greener than scientists have thought. Brand new observations from the Mars rover Perseverance have found that the “Red Planet” is also home to the same kinds of rocks that turn beaches on Earth a dark shade of green!

For as long as humans have been staring up into space at Mars, the fourth planet in our solar system, its color has never been in question — it’s a big red rock in space. Now that Perseverance has landed in the Jezero Crater, however, scientists are uncovering new layers to Mars’ geological history.

Researchers from Purdue’s College of Science say they expected to find sedimentary rocks in the crater, washed in by rivers and accumulated on the ancient lake bottom. What the probe actually found was volcanic rock, composed of large grains of olivine. This muddier and less-gemlike version of peridot tints many of Hawaii’s beaches dark green.

Mars may have looked like Earth billions of years ago

The rocks and lava the rover discovered are roughly four billion years-old. Similar rocks on Earth are incredibly weathered and beaten due to our planet’s active tectonic plates and billions of years of exposure to wind and water. On Mars, however, the rocks are in mint condition, making them much easier to examine.

Study authors say understanding the evolution and history of the rocks on Mars may reveal new insights into the planet’s ancient history. It may uncover whether the “Red Planet” once supported life like Earth and if the planet’s surface was similar to ours billions of years ago.

“One of the reasons we don’t have a great understanding of where and when life first evolved on Earth is because those rocks are mostly gone, so it’s really hard to reconstruct what ancient environments on Earth were like,” Horgan says. “The rocks Perseverance is roving over in Jezero have more or less just been sitting at the surface for billions of years, waiting for us to come look at them. That’s one of the reasons that Mars is an important laboratory for understanding the early solar system.”

Scientists believe they can use the history of Mars to reconstruct what Earth looked like at the same time in history, when life was just beginning to emerge. Those findings may ultimately help astronomers identify other planets and moons in the galaxy where extraterrestrial life exists.

Could there still be life on Mars?

One of the reasons scientists chose Jezero Crater is to search for signs of life on Mars. Discovering the potential for livable environments in a place as uninhabitable as the lava flows of Jezero Crater is raising the hope that scientists will find organic life in the fourth planet’s sedimentary rocks.

“We’re excited to see even better results about organics and ancient habitable environments,” Horgan says. “I think it’s really setting the stage that Mars is this watery, habitable place, and all the samples we’re getting back are going to help us understand the history of ancient microbial life on Mars.”

“From orbit, we looked at these rocks and said, ‘Oh, they have beautiful layers!’ So we thought they were sedimentary rocks,” Horgan concludes. “And it wasn’t until we were very close up and looked at them, at the millimeter scale, that we understood that these are not sedimentary rocks. They’re actually ancient lava. It was a huge moment when we figured that out on the ground, and it really illustrated why we need this kind of exploration. The tools we have on the rover are vital because it was impossible to understand the origin of these rocks until we got up close and used all our amazing microscopic instruments to look at them.”

The findings are published in the journals Science and Science Advances.