A quasar that is approximately 13.03 billion light-years from Earth is believed to be the earliest ever discovered as well as the most distant. The radiant quasar is believed to have been formed about 670 million years following the Big Bang. It contains a massive black hole that astronomers say could hold 1.6 billion suns.

Researchers say the quasar is also the first to reveal super-hot gases flowing from around the black hole at 20% of the speed of light. The quasar, known as J0313-1806, shows extraordinary star development in the galaxy where it is located.

Astronomers believe that quasars form from the massive energy of black holes when they suck up matter in the universe. This results in a whirlpool of extremely hot matter called accretion disks which are found surrounding the black hole. These phenomena are so bright, most of the time they shine brighter than the galaxies they belong to.

The quasar J0313-1806 contains an enormous amount of energy and a super dense black hole that is twice the density of the previous quasar discovered. This observation allows astronomers the ability to learn more about the development of black holes from the beginning of the universe.

“This is the earliest evidence of how a supermassive black hole is affecting its host galaxy around it. From observations of less distant galaxies, we know that this has to happen, but we have never seen it happening so early in the universe,” said lead author Feige Wang, the a Hubble Fellow at the University of Arizona’s Steward Observatory, in a January 2021 release.

It was previously thought that black holes were formed by stars bursting as they die and then falling into a black hole. Over time, black holes can gather energy to become massive black holes, but this process would require multiple lifetimes. Quasars formed during the formation of the early universe are assumed to have gained their mass in some other way since they were formed in such a short period of time.

The recently discovered quasar, however, contains such a massive black hole that the above ideas do not fit the model. According to the team, J0313-1806 would have needed 10,000 solar masses to even begin its early formation given its quick growth rate.

“This tells you that no matter what you do, the seed of this black hole must have formed by a different mechanism. In this case, one that involves vast quantities of primordial, cold hydrogen gas directly collapsing into a seed black hole,” said co-author Xiaohui Fan, associate head of the University of Arizona Department of Astronomy.

“Once you go to lower redshifts, all the models could explain the existence of those less distant and less massive quasars. In order for the black hole to have grown to the size we see with J0313-1806, it would have to have started out with a seed black hole of at least 10,000 solar masses, and that would only be possible in the direct collapse scenario,” said Fan.

“We think those supermassive black holes were the reason why many of the big galaxies stopped forming stars at some point. We observe this ‘quenching’ at lower redshifts, but until now, we didn’t know how early this process began in the history of the universe. This quasar is the earliest evidence that quenching may have been happening at very early times,” added Fan.

The team measured the luminosity of J0313-1806 and discovered that the quickly moving hot plasma is stemming from the mass of matter that the black hole is consuming. On average, the hole ingests mass that is equivalent to 25 suns per year. It has also been observed to pump out 200 solar masses each year.

“This is a relatively high star formation rate, similar to that observed in other quasars of similar age, and it tells us the host galaxy is growing very fast,” said Wang. “”With ground-based telescopes, we can only see a point source. Future observations could make it possible to resolve the quasar in more detail, show the structure of its outflow and how far the wind extends into its galaxy, and that would give us a much better idea of its evolutionary stage.”

“These quasars presumably are still in the process of building their supermassive black holes. Over time, the quasar’s outflow heats and pushes all the gas out of the galaxy, and then the black hole has nothing left to eat anymore and will stop growing. This is evidence about how these earliest massive galaxies and their quasars grow,” added Fan.

The study is published in Astrophysical Journal Letters.

Space hurricane? Yes, there really is such a thing — and it spews plasmaAugust 26, 2022 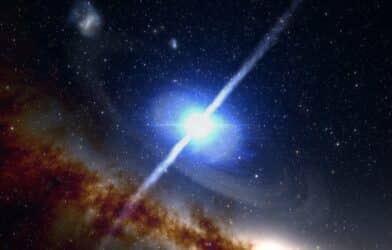