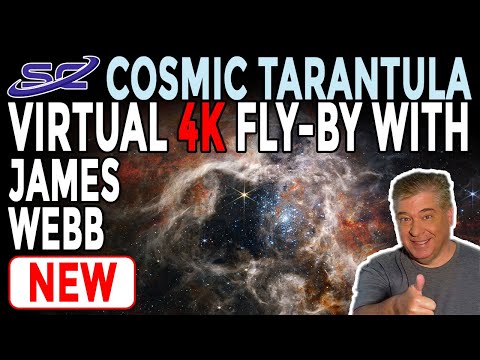 NASA’s newest space telescope is once again providing stunning pictures of the universe outside our home galaxy. In a kaleidoscopic series of colored images, the James Webb telescope is giving everyone on Earth a look at the largest and brightest star-forming region visible outside the Milky Way, the Tarantula Nebula.

The NASA telescope revealed a series of mosaic images, which stretch 340 light-years across the endless bounds of space. James Webb’s infrared camera enabled it to capture tens of thousands of never-before-seen images of the Tarantula Nebula, which were previously shrouded from view by cosmic dust. The stellar nursery acquired its arachnid nickname because of the gas, dust, and radiation swirls which resemble the legs and fur of the spider.

Astronomers touted the high-detail images of the “previously unseen cosmic environment,” which the telescope pushed through with mid-infrared wavelengths.

The outer space spider shape is about 161,000 light-years away from Earth and makes up part of the Large Magellanic Cloud galaxy. These are among the hottest and most massive stars known to humans. Astronomers working with the new telescope were able to home in on the tarantula-like cluster using high-resolution infrared instruments and Webb’s Near-Infrared Camera (NIRCam).

The NIRCam is able to detect light from the earliest stars and galaxies in addition to stars in the Milky Way and Kuiper Belt. The NIRCam uses instruments called coronagraphs, which allow researchers to snap images of very faint objects around a central bright object, including stellar systems like the Tarantula Nebula.

This #TransformationalTuesday, watch as @NASAHubble’s view of the Tarantula Nebula fades into Webb’s NIRCam, then MIRI instrument views. Hubble and Webb will work together to showcase the universe across multiple wavelengths of light. pic.twitter.com/GDIRSWWFQV

Last week, NASA’s official Twitter account announced that the Webb Telescope had identified its “first direct image of a planet outside of our solar system.” It highlighted a series of exoplanets and hinted that the telescope will continue to “study distant worlds.” The James Webb Space Telescope operations team touts itself for being able to “solve mysteries in our solar system…to look beyond to distant worlds around other stars.”

This latest release of images does just that as even more deep space galaxies are visible in the background of the Tarantula Nebula mosaic. Webb researchers note that the darkened inner cavity is particularly robust in the pictures because it has been “hollowed out by blistering radiation,” revealing a glistening, pale-blue cluster of massive young stars.

“Only the densest surrounding areas of the nebula resist erosion by these stars’ powerful stellar winds, forming pillars that appear to point back toward the cluster. These pillars contain forming protostars, which will eventually emerge from their dusty cocoons and take their turn shaping the nebula,” the NASA team writes in a media release.

Astronomers note that the Tarantula Nebula is particularly fascinating because its chemical composition is similar to massive star-forming regions which date back to the very beginning of the universe. The Tarantula Nebula is the closest and easiest-to-see example of what our universe may have looked like during the first two billion years of its existence, also called “cosmic noon.”

The NASA researchers highlight that the Tarantula Nebula and other star-forming galaxies still hold back many mysteries and clues to the genesis of the universe. Massive, thick clouds continue to shroud and hide stellar nurseries outside the Milky Way galaxy, but the Webb telescope astronomers say they may soon be able to reveal a “universe never seen before.”