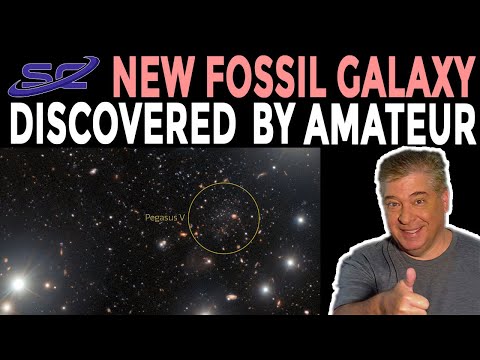 An amateur astronomer has made an out-of-this-world discovery. An ultra-faint fossil dwarf galaxy was discovered on the outer fringes of the Andromeda Galaxy.

Giuseppe Donatiello, an astronomy sleuth, made the astonishing finding after eying an interesting “smudge” in data in a DESI Legacy Imaging Surveys image. An international team of researchers followed up and revealed that the dwarf galaxy — called Pegasus V — contained few heavier elements and is likely to be a fossil of the first galaxies.

Using the 8.1 meter Gemini North telescope with the GMOS instrument, astronomers found faint stars in Pegasus V, confirming that it is an ultra-faint dwarf galaxy on the outskirts of the Andromeda Galaxy. Astronomers say the galaxy is extremely deficient in heavier elements compared to similar dwarf galaxies. That means Pegasus V is very old and likely to be a fossil of the first galaxies of the universe.

“We have found an extremely faint galaxy whose stars formed very early in the history of the universe,” says Michelle Collins, study lead author and astronomer at the University of Surrey, UK, in a statement. “This discovery marks the first time a galaxy this faint has been found around the Andromeda Galaxy using an astronomical survey that wasn’t specifically designed for the task.”

These fossil galaxies contain clues about the formation of the earliest stars. Astronomers theorized the universe would be filled with faint galaxies like Pegasus V, but that has not yet been the case. “If there are truly fewer faint galaxies than predicted this would imply a serious problem with astronomers’ understanding of cosmology and dark matter,” the media release reads.

Astronomers say these faint galaxies are hard to spot since it appears they’re just a few sparse stars hidden in vast images of the sky.

“The trouble with these extremely faint galaxies is that they have very few of the bright stars which we typically use to identify them and measure their distances,” states Emily Charles, a PhD student at the University of Surrey. “Gemini’s 8.1-meter mirror allowed us to find faint, old stars which enabled us both to measure the distance to Pegasus V and to determine that its stellar population is extremely old.”

“We hope that further study of Pegasus V’s chemical properties will provide clues into the earliest periods of star formation in the universe,” says Collins. “This little fossil galaxy from the early universe may help us understand how galaxies form, and whether our understanding of dark matter is correct.”

The study was published in the journal Monthly Notices of the Royal Astronomical Society.