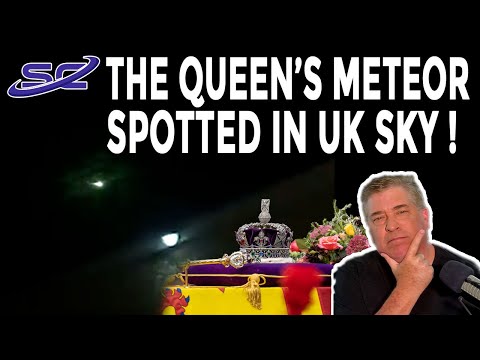 If proven to be meteorite, it could be named for Her Majesty if remains are found in Queen Elizabeth Forest Park

Scientists hope a massive fireball which flew through United Kingdom skies on Wednesday night will be found in Queen Elizabeth Forest Park, meaning it would be named after Her Majesty. The streak of light, which could be the first meteorite over Scotland in more than a century, lasted for ten seconds.

Experts say it may either be burning space debris or a meteorite, but did not closely resemble either in the way it fragmented. Scientists are hoping the remains may be found in the Queen Elizabeth Forest Park, in the Highlands, on Monday — the day of the Queen’s funeral.

Meteorites are named after the location where they are found. Dr. Áine O’Brien, 30, a planetary scientist at the University of Glasgow and a member of the UK Fireball Alliance, says she hoped the remains may be found in the forest so it will be named after Queen Elizabeth II. She missed seeing it herself as she was celebrating completing her PhD, but said citizen scientists and “wizard” specialists were combing through footage Thursday, with 200 people reporting witnessing it.

“We’ve not seen a Scottish meteor in over 100 years. We have had texts saying ‘how amazing would it be if it was found in the Queen Elizabeth Forest Park on Monday’. It was over Scotland, where she passed away,” Dr. O’Brien tells South West News Service. “If we found it on Monday that would be perfect. It was a beautiful moment, the main thing about these things is the public looking up at the stars. It brings people together these celestial events.

“The timing [coincides] with such a sad but important week in history — in 1066 the Halley’s comet passed over, which was stitched into the Bayeux Tapestry,” she adds. “There is a connection with kings of England and celestial events.”

It is possible the mystery object may have landed in the Atlantic, south of the Hebrides, due to the trajectory. It may have also fallen on an island, or in the Irish Sea. The West Coast of Scotland is another possibility.

Hey @elonmusk is this one of yours? pic.twitter.com/bEBNvsuA4i

She believes the fireball is likely a meteor. “It’s come at such a shallow angle which is what gives it a long streak,” she explains. “It went for about ten seconds, people saw it from all over.”

Social media users speculated the fireball was a heavenly moment sent by the Queen.

“Seeing this beautiful meteor soar over her beloved Scotland, I can’t help but feel the Queen is up there looking down on us all,” one Twitter use writes.

Another adds: “Any chance Queen Elizabeth came back in that meteor?”.

O’Brien, originally from Newscastle in England, believes there is certainly a connection to the beloved queen. “The fact this has happened this week of all times just makes it extra special. It is a really important celestial moment, that’s happened in a really important week for the country,” she says. “If it means that one child who saw it takes an interest in science, I would be happy.”